Posted on February 13, 2015 by spectralvisions

The 30th January, 2015, marked the launch of Spectral Visions Press, the University of Sunderland’s new publishing house, with Burns Night celebrations. This was yet another spectacular Spectral Visions event, celebrated in style. What started off with key note speakers in the afternoon, ended in a late night Ceilidh, rejoicing in Scottish culture.

At 4pm keynote speeches began by Steve Watts, Head of Department of Culture, and Colin Younger, senior lecturer and programme leader for English and Creative Writing, both of whom are integral members of the Spectral Visions clan. Steve Watt’s keynote presentation, ‘My Native Land: An Introduction to the Borders’ captured the audience’s attention, providing an interdisciplinary perspective into Walter Scott’s The Lay of the Last Minstrel. Drawing on geographical, anthropological and biographical viewpoints, Steve took the enthralled audience on a journey across the wild border between Scotland and England, outlining and examining Scott’s narrative ballad.

Following Steve’s spirited liminal, literary expedition, a dramatic performance commenced in the lecture theatre. English and Drama students Jenah Colledge, Chloe Cremins, Katie Watson and Brett Bain executed a striking dance performance of Robert Burns’ famous poem ‘Tam o’Shanter’, complete with atmospheric lighting, audio, and a reading of the piece. The audience appeared enraptured by the interesting performance, which was greeted with applause and many compliments.

Following the break from academic displays, Colin Younger engaged the audience in his keynote presentation ‘Burns and the Supernatural’. In true Spectral Visions fashion, Colin presented the bewitched audience with a stimulating and captivating commentary on the gothic motifs present in Burns’ most celebrated works.

The evening festivities then began in the Bonded Warehouse, a quirky and charming bar based on the University campus, with sweeping views of the River Wear. The upstairs room was reminiscent of a barn conversion with its rustic exposed beams, but more importantly, it held a good sized dance floor, perfect for the animated ceilidh!

Popular folk band Alisdair’s Misfortune initiated the party and connected with the audience, whilst playing traditional and lively music throughout the night. The Newcastle-based group have since won the prestigious Danny Kyle Award at this year’s Celtic Connections festival in Glasgow, which perfectly compliments their award-winning sound and spirit, which was entirely evident at the Burns Night festivities. 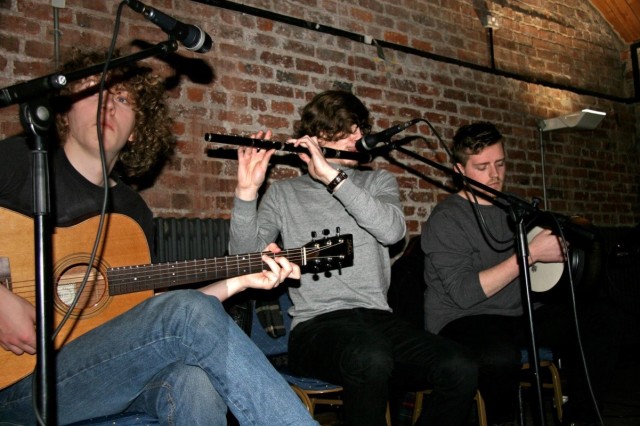 Guests arrived in full spirit and there was tartan-a-plenty! Such a vintage collection of tartan attire truly belonged in a fashion show. Guests were invited to take part in traditional folk-dance led by the band members and this really started an evening of fun to be had by all.

The band, with its inspirational sound and its positively successful attempts to involve the audience, created an ambience of entertainment and merriment. Of course, the band wasn’t the only talent of the evening; this was a University of Sunderland event after all! You could hear a pin drop when an enchanting singer Victoria Smith sang an a capella rendition of ‘My Love is Like a Red, Red Rose’, an emotive and flawless performance which reflected the sentiment in Burns’ loved poem.

This remarkable recital was soon followed by readings from Dr Robert Strachan Stephens, whom delivered original poetry from his own collections, Troll Tales and the Fables of Aesop in Scots Verse, in true Scottish spirit. The crowd were in awe during the performance by the extremely gifted poet, as he executed his Scottish poetry with passion and wit. Following a number of readings, Robert humbly chatted to the guests as they approached him with questions and compliments.

All of the events that took place, both academic and social, were wonderfully successful due the visionaries, the lecturers, the guests, and the performers – all Talents in their own right, all in Tartan.

Spectral Visions is an annual Gothic conference hosted by the University of Sunderland. It explores the dark, the decadent and the terrifying aspects of Gothic literature and language. This blog is a student-run initiative, where Visionaries showcase their creative talents and learning in short stories, poems and essays on the Gothic. You can follow us on Twitter at @spectralvisi0ns or like us on Facebook at facebook.com/uosgothic
View all posts by spectralvisions →
This entry was posted in News and tagged Alisdairs Misfortune, author, Ceilidh, Colin Younger, creative writing, Janet Cooper, review, Robert Burns, Robert Strachan, Spectral Visions, Spectral Visions Press, Steve Watts, Sunderland University, university of sunderland. Bookmark the permalink.