To end our discussion on Monstrous Women, Katie Watson brings you the introduction of an interesting two-part read on Mary Shelley and how a woman with no supernatural power can just as easily possess a ‘monstrous’ title. Katie graduated with a BA Honours in English and Drama and is currently studying an MA in English Studies. 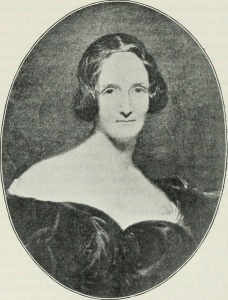 Spectral Visions have recently collected a series of pieces on the Monstrous Woman. Aside from the fictional female monsters our society has been replete with since Classical times (just take a look at Medusa), there are women not supernatural or superhuman, not evil or demonic, yet still typified as monstrous. The concept of the Suffragettes as social monsters to the hegemonic patriarch was explored by Olivia Metcalfe. I would like to follow a similar lead. One such woman, daughter of a celebrated feminist, a runaway at 16, eloping with a married man, was a disgrace, a monster to her society. Perhaps even the monster in her own allegorical tale. The insightful, emotive and sympathetic first person narration from the monster’s perspective suggests so.

Coming up is the bicentenary of that fateful night on Lake Geneva where amidst drugs, sex and speculation a tale of terror was born.

The galvanist theme so prevalent in Mary Shelley’s timeless Frankenstein (1818) was not just a nightmare for the authoress. The summer of 1816, or lack thereof, was filled with tempests, thunder, lightning. Electricity was in the air.

It was the result of an environmental phenomenon that the League of Incest and, indeed, the rest of the world would not believe could cause such international meteorological distress. Beyond contemporary scientific comprehension, the world was terrified: crops wiped out, floods, and perpetual darkness. This was certainly reflective of the apocalyptic suggestions in Revelations. Was our God destroying humankind in its new, enlightened state of secularism? A fitting punishment for a world playing with the flame of science.

It was the year without a summer.

Remarkably comparable with our own tumultuous weather. Hail stones and snow in late April. It’s almost as if that same ominous thunder bolt that struck a bulb in Shelley’s head is ready to strike again. Or perhaps it is a sublime homage to that brilliant writer, a reminder that we should be careful playing with fire and tempting fate.

The summer of 1816 was ruined by a natural event. Can we say the same of our own weather? Or perhaps our Promethean hand has had a part to play in it.

Spectral Visions is an annual Gothic conference hosted by the University of Sunderland. It explores the dark, the decadent and the terrifying aspects of Gothic literature and language. This blog is a student-run initiative, where Visionaries showcase their creative talents and learning in short stories, poems and essays on the Gothic. You can follow us on Twitter at @spectralvisi0ns or like us on Facebook at facebook.com/uosgothic
View all posts by spectralvisions →
This entry was posted in Uncategorized. Bookmark the permalink.